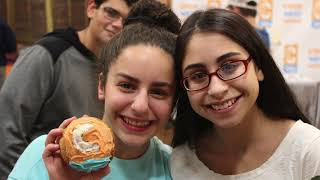 Cooking for Families in Need

My name is Alex Andelsman from CTeen West Suffolk; some of you may know me from my article about this shabbaton from last year. I can tell you that this experience was just as, if not even more, amazing than the first shabbaton in Washington, D.C.

When we arrived in D.C. Friday afternoon, along with CTeen of Bucks County, Pennsylvania, and Woodcliff, New Jersey, Hashem was crying tears of joy that we were able to gather as Jewish teens in Washington D.C… literally-we were getting drenched by the rain. However, the rain couldn’t stop us from heading to our first destination: the Holocaust Museum. It was my second time going, but for most of the teens, it was their first time. Walking through the museum hit me just as hard the second time as it did the first time. There are no words to describe the feeling of what the Jewish people went through The fact that we’re still here, alive and proud, years after the torment of the Holocaust, is proof that we will continue to survive and thrive. Our enemies have failed to defeat us time and time again. We were victorious and we will always be victorious, because we have Hashem. No matter what happens, Hashem will always be on our side.

This was truly the most inspiring shabbat for many reasons. The dinner was amazing and the singing and dancing with everyone was unbelieveable. I almost wanted to cry because we can connect on such a high level for one reason only-because we are Jewish. When we got back to the hotel, even though I was disconnected from the outside world and social media, I felt more connected than ever; I was connected to the teens and others around me, and connected to my neshama. We had a farbrengen in the lobby of the Courtyard Marriott in Alexandria, Virginia, during which I told a story about my five years in CTeen and how far I have come as a Jew. More importantly, I explained how much CTeen is growing, and that it will continue to grow. My favorite part of this trip was staying up late with my Jewish friends and going into deep conversation, connecting with them on a level I thought I could never reach.

Shabbat morning, we went to the service and had lunch. During the service, I saw two of my fellow teens get called up to the Torah for the very first time. I just want to say that the feeling of seeing that is so joyful. This was one of the many was that I was inspired throughout the trip. After the service, we had lunch, which was outstanding. Talking to friends, singing, dancing, and just enjoying the moment was extremely special to me. Following the lunch, we heard two speakers talk about the BDS (Boycott, Divest, and Sanctions) movement that is going on around college campuses in the USA and around the world. I learned, and I encourage all of you, to speak out against anti-Semitism when you go to college. I consider the BDS to be anti-Semitic and you should as well. The information that BDS tries to put forward is false or incomplete truths, and all of us as Jews need to speak out against it. After hearing these speakers, and visiting the Holocaust museum, I know now more than ever to NEVER BE SILENT. Being silent is letting the aggressors win. Even if you’re not the one being threatened, don’t sit back. Help that person, because you would want them to help you if you were in their situation.

We arrived back at the hotel, and after a walk to a park, a light meal, and two teen speakers, shabbat went out. I almost didn’t even want to look at my phone because I felt like the connection of shabbat would be lost-but it wasn’t. No matter what, we still remained connected and we always will. At the havdallah service, I will admit, I did shed a tear. Hearing the rabbi sing, and all of us linking arms and joining in havdallah service in public did make me cry, because the people during the Holocaust were unable to do that. They weren’t able to practice Judaism out loud and proud. I thank Hashem each and everyday that we live in a country where we can sing “Am Yisrael Chai” and dance in the middle of the Lincoln Memorial without any problems.

My last shabbaton as a CTeener was unforgettable and I hope to return as a chaperone one day; however, for anyone reading this article, please don’t stop loving CTeen. CTeen has been my life for the past five years, and I encourage all of you, to get as many people as you can to join this movement. There can never be too much love and kindness spread through CTeen. I want thank Rabbi Dovid Weinbaum, and everyone at CTeen who made this shabbaton, and every other event, possible. Without them, I would not have been able to have the best five years of my life.